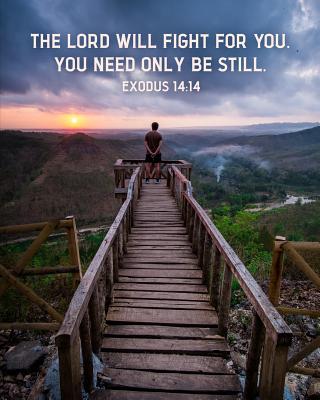 Imagine yourself on the bank of the Red Sea in Egypt.

Your people have been enslaved to an evil tyrant for centuries.

Your family has lived in a foreign and hostile land for generations.

You have dealt with oppressive labor and the destruction of your children.

After God brings the same destruction on Pharoah that Pharoah brought on Israel.

After God reveals his supremacy over the false gods of Egypt.

Yet even after Pharaoh loses his son, after his kingdom is in shambles, and after he beheld the undeniable power of God, Pharoah’s pride rises up with blood-thirsty rage. He assembles his massive army of chariots, soldiers armed spears and arrows, assembled to mow down Israel and destroy them forever.

Israel believed they were never going to feel the fear of Pharoah’s white-hot anger again, and yet here he comes with his entire army aimed at you.

Israel assembles at the bank of the Red Sea and it seems like a literal DEAD END.

Before them there is the insurmountable Red Sea and charging at them from behind them a seemingly invincible foe. In this desperate moment, Israel receives this powerful message…

EXODUS 14:13 “Do not be afraid. Stand firm and you will see the deliverance the Lord will bring you today. The Egyptians you see today you will never see again. 14 The Lord will fight for you; you need only to be still.”

God does what only God can do, He parts the Red Sea so that Israel might pass through.

Exodus 14 reminds us God makes a way when it seems like there is no way.

God provides a path when we are not sure where to go.

All of these events in the Old Testament find their ultimate fulfilment in the New Testament. Israel's deliverer, Moses, foreshadowed all of humanity's deliverer, Jesus Christ. Jesus came to deliver us from a tyranny worse than slavery in Egypt and bring us to our final Promised Land - eternal life in God's perfect presence!

The ocean of sin which keeps unholy humanity separated from a Holy God was infinitely wider and deeper than the Red Sea. Instead of a staff, God parted the way through this insurmountable chasm through a cross. Jesus, the Lamb of God, was sacrificed for our sin and paid the full price for our rebellion so that God's wrath might passover all who believe! The Gospel of Jesus Christ proclaims...

COLOSSIANS 2:13 "And you, who were dead in your trespasses and the uncircumcision of your flesh, God made alive together with him, having forgiven us all our trespasses, 14 by canceling the record of debt that stood against us with its legal demands. This he set aside, nailing it to the cross. 15 He disarmed the rulers and authorities and put them to open shame, by triumphing over them in him."

Christians do not pray for victory, we pray from victory.

Christians can stand because Christ stood in our place.

Christians can fight the good fight because Christ overcame our sin.

Christians can resist the devil because Christ crushed the head of that serpent on the cross!

As George Whitefield once proclaimed, "Since then Christ is praying for us, whom should we fear? And since He has promised to make us more than conquerors, of whom should we be afraid? No, though an host of demons are lined up against us, let us not be afraid; though the hottest persecution should rise up against us, yet let us put our trust in God. Even though Satan, and the rest of his apostate spirits, are powerful, when compared with us; yet, if put in competition with the Almighty, they are as weak as the smallest worms."

Considering our victory in Christ...

Considering the nature of our God as a Father and Divine Warrior...

Whatever battles we are facing, we can be still and know God is fighting for us.