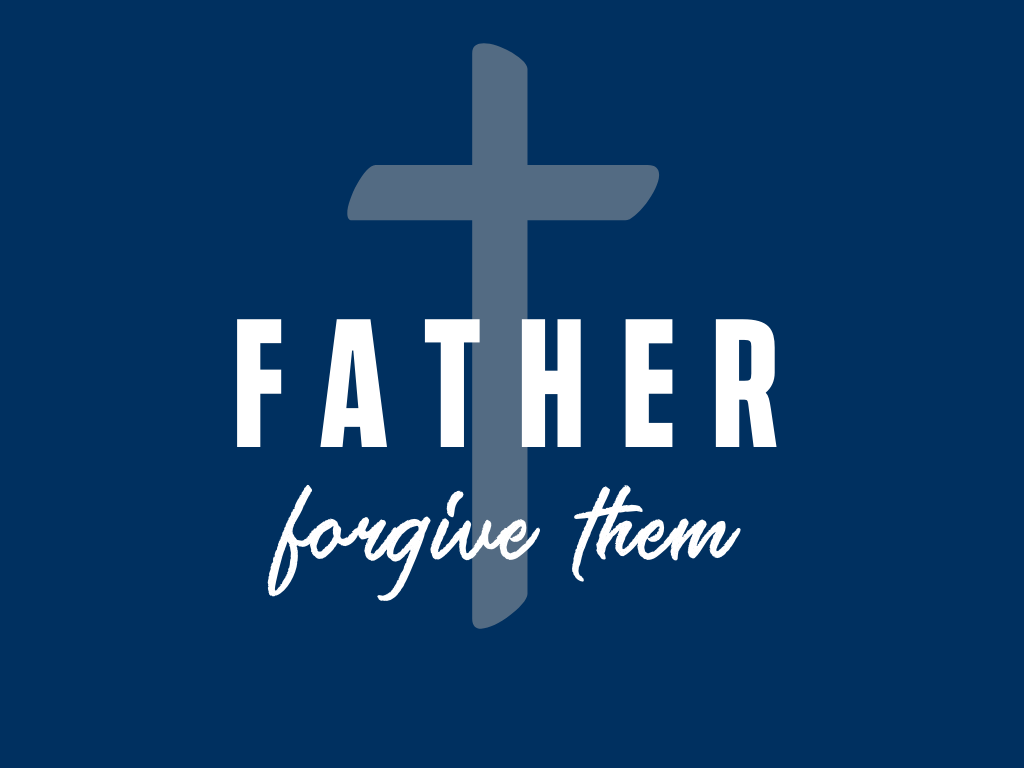 34 And Jesus said, "Father, forgive them, for they know not what they do." And they cast lots to divide his garments. 35 And the people stood by, watching, but the rulers scoffed at him, saying, "He saved others; let him save himself, if he is the Christ of God, his Chosen One!" (Luke 23:34-35)

On the cross, suffering for the sins of the others, Jesus never forgot his mission. He came to fulfill the promise that had been given to Adam and Eve in the garden (Genesis 3:15), the words that had been given to the prophets, and the hope that had been in the hearts of God’s people. Jesus, speaking to Zacchaeus, spoke clearly about his Father-mandated mission, “For the Son of Man came to seek and to save the lost” (Luke 19:10).

Therefore, when we arrive at Luke 23, while we will undoubtedly be overcome with gratitude and love for the Savior, we need not be surprised by his words. Christ was always about the work of his Father (John 8:28-29), and his time on the cross was no different. He was even concerned about those who were killing him. Christ did not forgive in spite of these people, Christ forgave because of them.

Christ gives us much to think about in these two verses:

Forgive people in hopes of repentance.

Peter acknowledges the ignorance of those who crucified Christ, the ignorance of those that Jesus prayed for, in the book of Acts. “And now, brothers, I know that you acted in ignorance, as did also your rulers” (Acts 3:17). While acknowledging their ignorance (which does not absolve them of responsibility), Peter also hopes that their response will be repentance. “Repent therefore, and turn back, that your sins may be blotted out” (Acts 3:19). We should pray for and forgive others in the hope that they will know and follow Jesus. The goal of forgiveness is not to make ourselves feel better or to receive glory by showing how good we are, #humblebrag; the goal is to bring glory to God and the Gospel to others.

We don’t have insight into how this prayer impacted others. We may never know to what extent others were impacted, or how many people, because of this one prayer, were given hearts of flesh. James writes, “Therefore, confess your sins to one another and pray for one another, that you may be healed. The prayer of a righteous person has great power as it is working” (James 5:16). Therefore, make no mistake about it, when Jesus prayed for the forgiveness of others, it was full of great power. JC Ryle, noted pastor and author, wrote,

Perhaps this prayer was the first step toward the penitent thief’s repentance. Perhaps it was one means of affecting the centurion, who declared our Lord ‘a righteous man’ (Luke 23:47), and of moving the hearts of all the other people who witnessed  the crucifixion and who beat their breasts and went away (Luke 23:48). Perhaps the 3,000 converted on the day of Pentecost, some of whom may have been among our Lord’s murderers, owed their conversion to this prayer.

The people, those for whom Jesus had just prayed, would go on to insult him in the very next verse. Their immediate response was not repentance but a hardening of heart. “And the people stood by, watching, but the rulers scoffed at him, saying, ‘He saved others; let him save himself, if he is the Christ of God, his Chosen One!’” (Luke 23:35).

Take note of exactly how backwards they had all of this. They cried mockingly that Jesus should save himself to prove he was truly the Christ. Jesus knew that because he was the Christ, he must die. His suffering was for God’s glory and the salvation of those who would believe. In order for Christ to save others, it would be because he did not save himself.

As a culture the answer to this question is pretty clear. We often elevate those who “punch back,” as if this is some kind of godly trait that we should admire. Indeed, we have become a culture that automatically punches back on social media, hoping for the right words or statement that can shut down a conversation. We sense persecution at the sight of disagreement. Rather than using it for Christ, we strive to attain the glory by showing others how pithy and “wise” we can be; it is a glory that was never meant for us.

I pray that we would not allow the church to follow this cultural pattern. Instead, we must follow the pattern that Christ set for us. We must suffer like Christ suffered. I am not stating that everyone should be tortured or die on a cross; our response to suffering should be like Christ’s. When we are persecuted, either perceived or real, our aim should be for the glory of God and the salvation of others. Wherever we are suffering, let us always look to Christ’s suffering as our pattern.

21 For to this you have been called, because Christ also suffered for you, leaving you an example, so that you might follow in his steps. 22 He committed no sin, neither was deceit found in his mouth. 23 When he was reviled, he did not revile in return; when he suffered, he did not threaten, but continued entrusting himself to him who judges justly. 24 He himself bore our sins in his body on the tree, that we might die to sin and live to righteousness. By his wounds you have been healed. (1 Peter 2:21-24)

12 Put on then, as God's chosen ones, holy and beloved, compassionate hearts, kindness, humility, meekness, and patience, 13 bearing with one another and, if one has a complaint against another, forgiving each other; as the Lord has forgiven you, so you also must forgive. (Colossians 3:12-13)

Can we honestly say that this passage is descriptive of the way that we live? Are our lives marked by humility and a willingness to bear with one another? Scripture commands that we must forgive as the Lord has forgiven. There is no sin that has been committed against us that is more heinous than our sin against God. Yet, he forgives us. Nehemiah, speaking of God’s people, writes this about our gracious God,

17 They refused to obey and were not mindful of the wonders that you performed among them, but they stiffened their neck and appointed a leader to return to their slavery in Egypt. But you are a God ready to forgive, gracious and merciful, slow to anger and abounding in steadfast love, and did not forsake them. (Nehemiah 9:17)

How sweet it would be if that world looked at the Church and described her this way. Let us “abound in steadfast love” towards those who do not deserve it. Let us “not forsake them” though they sin against us. Let us be “ready to forgive” no matter the wrong. Let us look to Christ and follow his example, his good, perfect, and lovely example, so that all we do may glorify the God who forgave us.