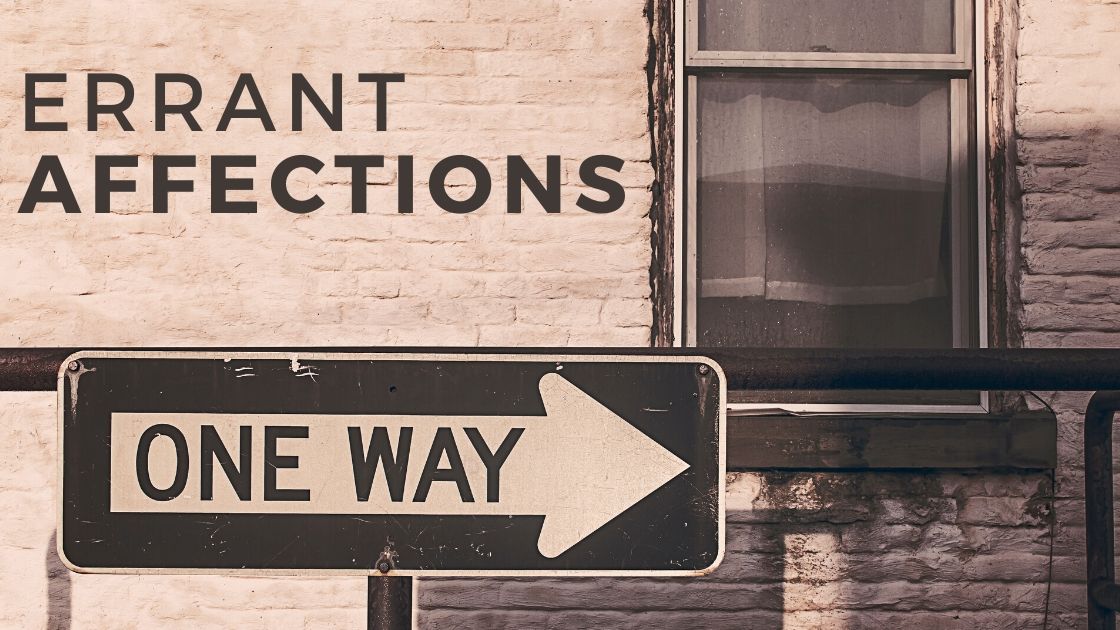 Our affections are important to God. The affections we have will be determinative of our actions, both today and for the remainder of the lives we have been granted here on earth. This is why, when asked what the greatest commandment is, Jesus quotes from the book of Deuteronomy. “‘Teacher, which is the great commandment in the Law?’ And he said to him, ‘You shall love the Lord your God with all your heart and with all your soul and with all your mind. This is the great and first commandment’” (Matthew 22:36-38).  The greatest command is a command to love. “You shall love.” The object of our affection is commanded to be the Lord. The love for the Lord we are instructed to have is to consume all of who we are: heart, soul, and mind. Love for “the Lord your God” is of first importance, more important than moral hands, more important than a tamed tongue, even more important than evangelistic feet.

Unfortunately, we rarely take seriously this command, the greatest of them all. Sure, we love God, or at the very least we would say we do. Our lives might even reflect an appearance of one who loves God. But this is not good enough. The Apostle John reveals the problem of low affection and high works through the Church in Ephesus. They did much well.

Look at how Jesus speaks of the church, “I know your works, your toil and your patient endurance, and how you cannot bear with those who are evil, but have tested those who call themselves apostles and are not, and found them to be false. I know you are enduring patiently and bearing up for my name's sake, and you have not grown weary” (Revelation 2:2-3). Does this sound like a church in need of rebuke? On the contrary, the Church in Ephesus appears deserving of commendation and recognition. Jesus twice notes their patient endurance. Moreover, Christ acknowledges the church is enduring for his “name’s sake.” The Ephesians were doing good works! Outwardly, they seemed worthy of imitation and elevation.

Unfortunately, the problem was not an external issue but an internal rotting. “But I have this against you, that you have abandoned the love you had at first” (Revelation 2:4). The affection that the church had for Christ had been abandoned at the altar of good instead of the altar of God. The condemnation of Christ was not gained by their actions but rather because of their affections.  Indeed, just as the hymnist wrote in “Come Thou Fount of Every Blessing,” we are “prone to wander.”

It was not as though the Church at Ephesus was in this position from the start. The people had not always been without love, as the passage itself notes. They had simply “abandoned the love [they] had at first.” Rather than growing in their love for Christ, the Ephesians had discarded it. Some did so perhaps slowly, even imperceptibly, while others may have moved away quickly, without thought or intention. They had maintained a facade of good works and right living, but their hearts had fallen into a state of disrepair.

A heart that is unmoved by and unattracted to the glorious beauty of our God is certainly not a new concept. It has existed since Genesis chapter 3. Perhaps, for many who will read this, you are quite familiar with the story of Adam and Eve. You know the story of the serpent speaking with Eve, and Eve giving in to the offered temptation. Let us look again to the passage,

1 Now the serpent was more crafty than any other beast of the field that the Lord God had made. He said to the woman, “Did God actually say, ‘You shall not eat of any tree in the garden’?” 2 And the woman said to the serpent, “We may eat of the fruit of the trees in the garden, 3 but God said, ‘You shall not eat of the fruit of the tree that is in the midst of the garden, neither shall you touch it, lest you die.’” 4 But the serpent said to the woman, “You will not surely die. 5 For God knows that when you eat of it your eyes will be opened, and you will be like God, knowing good and evil.” 6 So when the woman saw that the tree was good for food, and that it was a delight to the eyes, and that the tree was to be desired to make one wise, she took of its fruit and ate, and she also gave some to her husband who was with her, and he ate. (Genesis 3:1-6)

While many applications and much wisdom can be drawn from this text, direct your attention to verse 6. Read it again. The problem for Eve became her affections. Even more than her actions, Eve’s trouble began when her affections were taken from the God who eternally fulfills every need to the fruit that could only temporarily fulfill one need. Her heart was drawn to the fruit outside God’s will instead of the infinite God, who, within his good and gracious will, gave himself along with the entire garden of fruit. She was overwhelmed by her desire for the fruit, her affection for God was suddenly cold. The one who is the giver and sustainer of life became secondary to her desire for that which brought death into the world.

How foolish it was for Eve to sacrifice her intimacy with God for fruit! Surely her affection for the one who had given her infinite love would be greater than her desire for an inanimate, unfulfilling object. Grievously, my own heart is often given to this same capricious behavior, replacing the eternal, almighty God with something or someone never meant to become an object of my greatest affection. When we read Revelation 2:4, it is easy to see our own hearts. Have we abandoned the love we first had? Are our hearts unmoved, uncaptivated by a Father who sacrificed His Son so that we might be made righteous?

I would submit to you this challenge: consider to what or whom your affections are given. What do you love doing? What excites your heart? In Creature of the Word, the authors refer to the Dallas Cowboys stadium as the largest worship venue, “With close to 30,000 parking spaces, the ability to hold 110,000 people, a state-of-the-art sound system, and a gigantic center-hung, high-definition television screen that measures 160x72 feet, it is the perfect location to gather, sing, shout, cry, clap, and feel the energy that occurs when that many souls come together with the same hope in mind.” Truly many hearts have been won to the idolatry of sports and entertainment at the doors of stadiums and arenas. Many other hearts have been won to the idolatry of success or wealth in the workplace. Yet other hearts have been drawn to the idolatry of morality at the altar of pride. So what is the solution to this deeply rooted problem of errant affections?

Thankfully, because of our gracious God, we have been given a written, authoritative Word. It directs our hearts back to the God who loves us, the only one who provides affection before we give our own (1 John 4:19). Heed the call that Christ gives to the church in Ephesus, “Remember therefore from where you have fallen; repent, and do the works you did at first” (Revelation 2:5a). First, we must remember. Our affections are a result of our thoughts, and we must think about the sacrifice Christ made for us in his incarnation, his perfect life, and his crucifixion. Our affection for God cannot help but grow when we consider who he is and what he has done. Can you see why our thoughts are so important? Let our thoughts be ever directed by the Scripture that it might inform all of our thinking about God! May we say with the psalmist, “I will meditate on your precepts and fix my eyes on your ways. I will delight in your statutes; I will not forget your word” (Psalm 119:15-16). Reading the Bible, delighting in the words of God, will not make God love you any more than he does now (he already loves you perfectly), but rather, reading the Bible causes you to love God more. Works ought not be an effort to gain his love. They are an effort to show and grow your own love and affection for him!

Secondly, Christ calls for repentance. Not only must we return to God, we must forsake that which has held captive our affections. Let us look to the example of Hezekiah in the Old Testament,

3 And he did what was right in the eyes of the Lord, according to all that David his father had done. 4 He removed the high places and broke the pillars and cut down the Asherah. And he broke in pieces the bronze serpent that Moses had made, for until those days the people of Israel had made offerings to it (it was called Nehushtan). 5 He trusted in the Lord, the God of Israel, so that there was none like him among all the kings of Judah after him, nor among those who were before him. 6 For he held fast to the Lord. He did not depart from following him, but kept the commandments that the Lord commanded Moses. (2 Kings 18:3-6)

Hezekiah did not move the idols to another room or out of view. He “broke the pillars” and “cut down the Asherah.” He smashed the idols of his day in order to keep his heart from further wondering. Truly this is a great picture of repentance. Tragically, we all too often keep our deadly idols merely hidden from view so that they may reemerge and regain our affection. Repent by destroying the idols that have competed for your affection.

I pray that we would always be overwhelmed and awestruck by God. We have done nothing to earn his love, yet he loves us. We have pushed him away, yet he draws near. We rebelled against the glorious, omnipotent God, and so he decided to send his Son to die on our behalf. What kind of love is this? “For the word of the cross is folly to those who are perishing, but to  who are being saved it is the power of God” (1 Corinthians 1:18). Place your affections fully and forever on the living God who is worthy and who is the only eternally soul-satisfying object of worship.