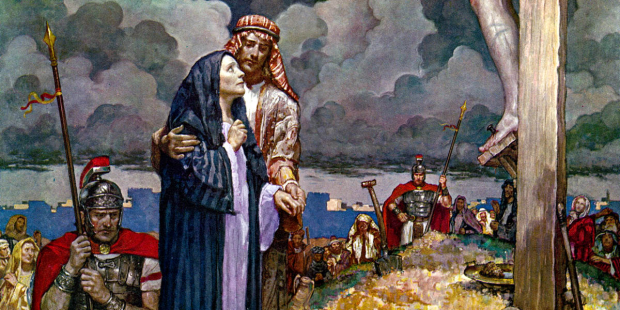 "Standing by the cross of Jesus were his mother and his mother's sister, Mary the wife of Clopas, and Mary Magdalene. When Jesus saw his mother and the disciple whom he loved standing nearby, he said to his mother, “Woman, behold, your son!” Then he said to the disciple, “Behold, your mother!” And from that hour the disciple took her to his own home" (John 19:25-27). "Then Jesus, calling out with a loud voice, said, 'Father, into your hands I commit my spirit!' And having said this he breathed his last"(Luke 23:46).

For many people, family ties are very important. The connection that we have with our parents, our siblings, our children, or other relatives is one we do not want to lose. Even where the whole family isn’t very close, we usually have one or two family members with whom we share a special bond. When a family relationship is broken, we are devastated. If we are able to restore our relationship with a family member, there is a joy and satisfaction that is like no other we have in life.

1. A relationship released: “Woman, behold, your son. Behold, your mother.”

Jesus had been abandoned by His disciples in the garden and gone through His trial and abuse at the hands of the authorities alone. He bore His cross through the streets of Jerusalem alone, with a stranger enlisted to help Him. Now as He hung on the cross, two of His family members appear at the foot of the cross. One was John, the beloved disciple, who was probably a cousin of Jesus. The other was Mary, His mother.

Over thirty years ago an old man in the Temple, Simeon, had prophesied to Mary that “a sword will pierce through your own soul also.” This, she thought, was that sword. She had to watch as her son, whom the angels had proclaimed the Savior and Lord, was rejected by the people around the cross, including the religious leaders. She saw Him bleeding, suffering, and dying, and there was nothing she could do about it.

Jesus looked down and saw her there with John. As the eldest son of the family, He was responsible for his mother’s care. While his earthly brothers had cared for her during His ministry, Jesus knew that they did not believe in Him. Mary needed someone to care for her who shared her knowledge and belief in who her miraculous Son was. At the same time, Jesus was about to take on the sin of the world as the perfect sacrifice, God and man, and His earthly relationships were coming to an end.

If Mary thought she was already experiencing that sword through her soul, Jesus’ next words may have been an even deeper wound. While Jesus shows mercy and care for his mother, his words create a separation between them. The term “woman” was not one of disrespect but by using it instead of “mother” Jesus was reminding Mary that she had no more claim on Him. Jesus’ earthly life was about to end, and with it His earthly connections. Losing this bond with her firstborn Son, about whom she had thought and pondered so much, was another thrust of the sword.

Jesus did not leave Mary alone, however. Even from the cross He ensured that she would have the care she needed. John stood there with her, so Jesus entrusted him with the care of Mary. His word created a new relationship. Mary was now to consider John as the son who would care for her, while John took responsibility for Mary as for his own mother. John took Mary to his home, apparently at that moment so that she would not have to witness Jesus’ death.

Mary’s painful experience serves as an example to us that no relationship, however good and natural it may be, can stand in the way of our relationship with the Lord. Family and friends cannot stop us from following in the footsteps of Jesus. When it is time to make a decision to do and to be what Christ calls us to be, we must be willing to release all earthly connections that would stand in the way of obedience to Him.

Having cared for His earthly mother, Jesus now turned to His heavenly Father.

2. A relationship renewed: “Father, into your hands I commit my spirit.”

On the cross Jesus experienced for the first time separation from His Father. We have no way of understanding or explaining how this could be; all we know is that Scripture tells us that it happened. In His anguished cry of “My God, my God, why have You forsaken me?” Jesus expresses the horror of a broken relationship with God. In that moment Jesus suffered for us the infinite gap between God and sin, so that He could take the wrath of the Father and the judgment for sin on our behalf. The only thing that could separate Jesus from His Father was sin; He had no sin, so it was ours that turned the Father away from His Son.

That relationship may have been broken for a moment, but it would not remain so for long. The work of redemption finished, Jesus utters His final word from the cross. In that word, He indicates that His relationship with His Father is intact and strong. Jesus trusts that God the Father will receive Him and accept His sacrifice for sin. He does not simply drift off to death, but consciously places Himself in the hands of His Father to end His life. This is a confidence born of a full and complete knowledge and trust in the Father with whom He had been connected from all eternity.

In His experience of separation and restoration, Jesus fulfilled the judgment of God on sin. We who deserve eternal, infinite separation from God are able to have our sin forgiven and be reconciled to God through the work of Jesus. His own restoration to the Father after taking on our sin gives us hope that we too can be restored despite our sin. Watching Jesus on the cross reminds us of the terrible price that must be paid for sin and of the amazing grace of God in sending His Son to take His wrath in our place. Through faith in Jesus our relationship to God is restored to what He created it to be.

While our earthly relationships are important, our heavenly relationship with God is far more significant. Our sin and rebellion breaks that relationship, and only through the work of Jesus are we able to be brought back into the family of God. No other relationship we have can take the place of being a child of the almighty God. On the cross, Jesus showed us the way to God. Let us take the steps necessary to come to the Father through faith in the Son and to build that connection on into eternity.

Your Prayers Are Too Small

From Rebellion to Reverence

Turning Our Hearts to the Faithful God