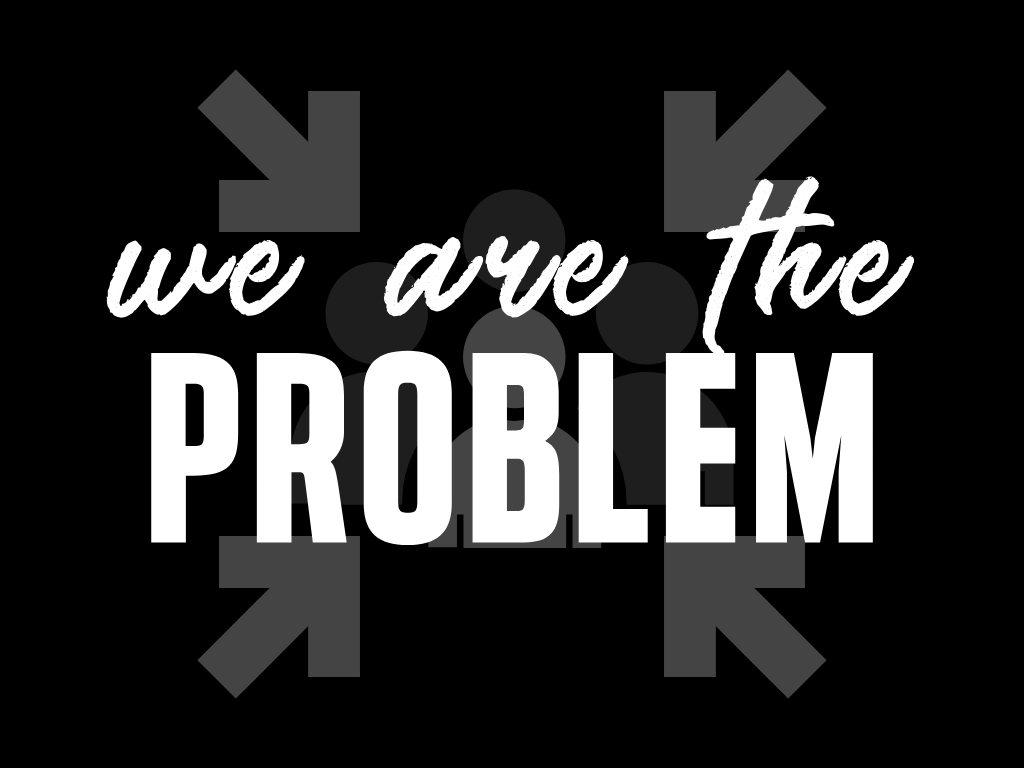 All of humanity is born with the innate ability to blame others for their problems. We are capable of surveying any problematic circumstance and finding someone or something to blame. Even if outwardly we profess ownership of a problem, we can find a way to justify our action or inaction inwardly. Perhaps it is not difficult for you to remember some recent issue that arose privately or publicly for which you have found a way to justify by thinking or stating that it was the fault of someone else. Indeed, if you have said, thought, or done something wrong, it must be due to another person or an external factor over which you had no control, right?

Moreover, this blaming comes so natural that even, and perhaps especially, people do it to God. They blame God for why they cannot live holy and why they do not love Him. While this statement sounds strange, think about it. How often do we hear of disobedience rationalized or justified by lowering God’s standard? Surely God would be okay with this because He knows my situation. The Bible may say that, but that doesn’t sound like the God I know. God wouldn’t want this for my/your life. This is dangerously common and all too often hidden within the dark recesses of the heart.

All of mankind has engaged in this behavior since sin entered the world in the beginning. Remember that passage in Scripture, “the Fall”? God created a world that was good. He placed Adam, His Image-bearer and ambassador, in the Garden of Eden “to work it and keep it.” (Gen. 2:15). After the creation of Eve, the woman who was also made in His image, we are introduced to the serpent.  “Now the serpent was more crafty than any other beast of the field that the Lord God had made. He said to the woman, ‘Did God actually say, ‘You shall not eat of any tree in the garden?’’” (Gen. 3:1). As you perhaps well know, this serpent leads Adam and Eve into committing the first sin. Instead of living in eternal, perfect harmony with God in the Garden, Adam and Eve both disobey God’s one command. Let us look at the manner in which Adam and Eve respond to their disobedience:

If ever there was one who was particularly skilled at passing the blame, it was Adam, the original man. Not only does he pass the blame, he does it twice! Adam begins by directly projecting the blame for the situation right back to God. “The woman who you gave to be with me…” It is really your fault God because we would not have messed up if you had never given me this woman to be with in the first place. God, you are the problem. What is happening here?! How could Adam possibly think it wise to try and turn this one back on God, the omnipotent being who had given him life and breath? Adam’s audacity is astounding.

The true, ugly reality is that Adam and Eve were the problem. God, who had given them life and an abundance of opportunity, made clear that they were the problem when He removed them from the Garden. No longer would they be allowed to live without pain or sadness, but instead, their new existence was to be enveloped by the curse. It is a curse that was issued by the almighty God, and it has ramifications that have echoed throughout history and into every corner of the world we experience today.

Adam and Eve, while being the first by virtue of actually being the first, are far from the only people who have attempted to blame God for their decisions. This in fact becomes a relatively common reaction to difficulties, trials, and poor decisions in the Old Testament. We need not go much further in Scripture to find another example of humanity justifying bad decisions by blaming God for their current position. We can remain in the book of Genesis for the next example:

Just one chapter prior to this passage, God had made a covenant with Abram, one in which He had promised that Abram would have innumerable descendants, as vast as the stars in the sky. However, he and his wife Sarai were very old and beyond childbearing years. So of course Sarai, seeing no other option to the fulfillment of God’s word, improvises by taking matters into her own hands. She must behave in this manner and take this course of action because “the Lord has prevented me from bearing children.” Sarai blamed God for her poor decisions, and Abram followed. This was just the start of a long pattern that would be visible through all of Abraham’s descendants.

The Israelite people as a whole began to blame God for their problems in the book of Exodus. All of the descendants of Abraham were enslaved by the nation of Egypt, but God heard their requests for deliverance. “And God heard their groaning, and God remembered his covenant with Abraham, with Isaac, and with Jacob. God saw the people of Israel—and God knew.” (Exodus 2:24-25). God, with great love for His people, knew the troubles they were experiencing at the hands of the Egyptians. So long story, really short, He sent Moses as a deliverer for the Israelites.

Once the Israelites were freed from the tyranny of the Pharaohs, they still had some significant obstacles to overcome. Rather than relying on the God who had miraculously secured their freedom from Egypt, the Israelites began to grumble and blame God for their problems. They complained that God had left them to die by the sword, had brought them into a wilderness with no food, and had led them into a land with no water. This was not how they were supposed to be living. After all, it was all His fault, through Moses, that they weren’t still in Egypt as slaves. The fact that a sentence like that can even be written is absurd.

The list of those who have partaken in this blame game against God is long and filled with people from Scripture. Kings like Saul and David both pulled this card, and even the forefather Jacob engaged in this sort of behavior. Even prophets like Elijah and Jonah fell victim to this mindset.

Tragically, we also engage in this very behavior. In our humanity, we have an expectation for who God ought to be and how we ought to behave. Rather than looking at the God of Scripture and accepting the reality of who He is, we create our own god that sticks to our guidelines. Here’s the bad news: any god we make has no power, and it will never change the God who is all-powerful. Our thoughts and beliefs don’t matter if they don’t align with the inerrant Word of God.

God is the good, holy, perfect standard. This is not the problem. He is not the problem. We are the problem. We are broken sinners in need of a Savior. Let us be careful to never blame God for our disobedience or lack of love towards Him. Instead, let us look deeply upon His holiness displayed in Scripture and love Him more. Rather than seeing His holiness as some sort of obstruction to our love, let it be the very thing to which our hearts are given. In His good and perfect and holy will, He saves His people. Instead of blaming God for our inability to obey and love, let us long and strive to be just like Him.