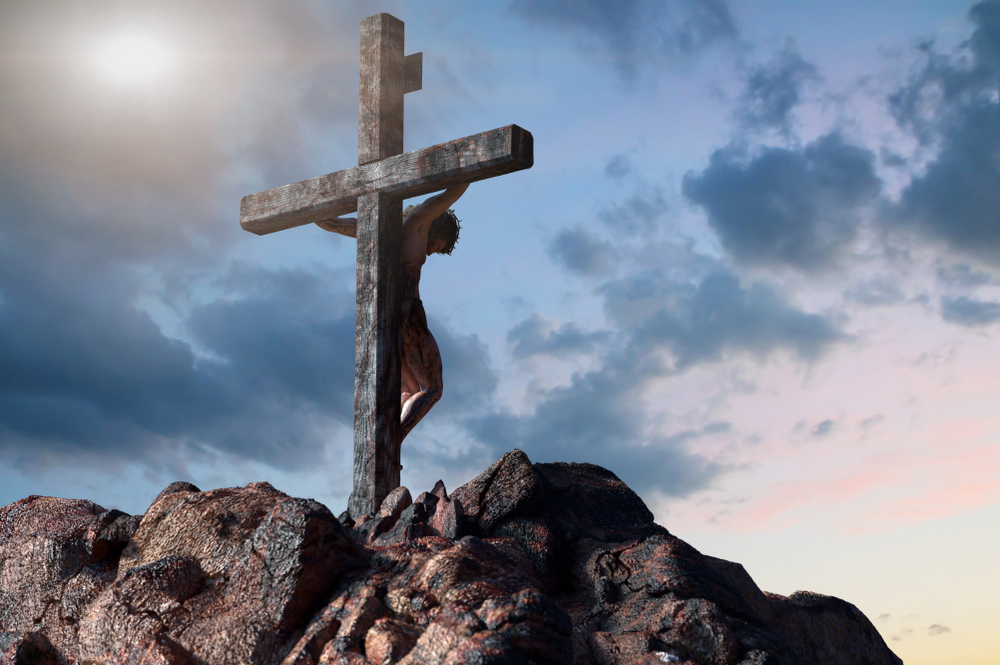 Over two years ago we began a study in the Gospel of John. Our journey through John began with the inspired, masterful thesis of John 1:14, which would lay the ground work for the life-changing, hope-breathing, world-shaking, eternity-altering events which were about to occur…

“And the Word became flesh and dwelt among us, and we have seen his glory, glory as of the only Son from the Father, full of grace and truth.”

The Word of God, Jesus, who was in the beginning, who was with God, and who was God, now in today’s study speaks his final words from the cross.

The Word of God, Jesus, who was in the beginning, will now experience his earthly ending.

The Word of God, Jesus, who was with God for every second of eternity past will now experience what is like to be without God for three dark and desolate hours on Good Friday.

The Word of God, Jesus, who became flesh, has now experienced that same flesh whipped, beaten, pierced and nailed to a wooden cross.

The Word of God, Jesus, who dwelt among us, came to not only dwell but to die.

The Word of God, Jesus, full of grace and truth, is about to die on the cross because the truth is without grace we would all die in our sin and be separated from God for eternity in hell.

Behold my friends, the Eternal Word of God and Son of God crucified in our place for our sins.

Today we will behold the words of the Word as he gasps his final breath.

In John 19 we will hear three of the seven final statements Jesus made from the cross of Christ.

The FIRST word was a word of FORGIVENESS from the cross. It was an intercessory prayer TO God, FROM Jesus, FOR the people who betrayed, mocked, shamed, tortured and crucified him, “Father, forgive them; for they know not what they do.”

The SECOND word from the cross was a word of ASSURANCE to a convicted and condemned criminal crucified next to Jesus, “Today, you will be with me in paradise.”

The THIRD word from the cross was a word of AFFECTION. The Son of God providing for his earthly mother, even at the hour of his death, “Woman, behold, your son!” Then he said to the disciple, “Behold, your mother!”

The FOURTH word from the cross was a word of ANQUISH. God the Son, forsaken by God the Father, “Eli, Eli, lema sabachthani?” that is, “My God, my God, why have you forsaken me?”

The FIFTH word from the cross was a word of DESOLATION. The One Who Gives Living Springs of Water to drink, now crying out from the dry barren wasteland of our sin, “I thirst.”

The SIXTH word from the cross was a word of COMPLETION. This word will ring throughout eternity, after Jesus drank the cup of God’s wrath to the last drop, after Jesus became our sin and took our hell, he declared, “It is finished!”

The SEVENTH and last word from the cross was a word of RETURN. The Son of God returning to His Father after perfectly fulfilling everything the Father sent him to accomplish, “Father, into they hands I commend my spirit.”

Today we will study the three words recorded in the Gospel of John.

At the foot of the cross there was a crowd consisting of venomous and self-righteous Chief Priests, the greedy gambling soldiers, and a mocking angry mob. In the midst of this unimaginably dark and depraved scene there stood three Mary’s and one of Jesus’ disciples. One of these mother’s is Jesus’ very own earthly mother.

Was Mary thinking of her newborn baby laid in swaddling cloth in a manger as she now saw her son stripped of his clothing as he was nailed to a cross?

Was Mary thinking why the Angel Gabriel gave her the name “Jesus, the Lord saves” for her son?

Was Mary still feeling favored by God as she sees her son seemingly forsaken by God?

Did Mary remember when Simeon prophesied to her at Jesus’ dedication, “a sword will pierce through your own soul also”?

Mary was there at Jesus’ birth and will now witness firsthand his death.

Now there is no Magi bearing gifts from the East, there are no shepherds seeking a savior, there is no angelic host proclaiming the glory of God. There is only darkness and death.

The tiny hands of the newborn king, which would be placed into the hands of this poor young virgin mother and her carpenter husband, are now pierced with nails.

As one scholar writes, “Mary was the first who planted kisses on that brow now crowned with thorns. It was she who guided those ands and feet in their first infantile movements. His disciples may desert Jesus, His friends may forsake Him, His nation may despise Him, but his mother stands there at the foot of the cross.”

Jesus is dying for Mary’s sins as well as yours and mine. His hands are stretched out now for her forgiveness and his Word is stretched out for her care and provision. He desires his mother to be in good hands after he dies for her sins.

So Jesus entrusts the mother whom he loves to the disciple who loved him. It is as if Jesus is saying to John, “Let her be your own mother. Let your love for me be manifested in your care for her.” We should model this in the church…

MATTHEW 12:46 While he was still speaking to the people, behold, his mother and his brothers stood outside, asking to speak to him. 48 But he replied to the man who told him, “Who is my mother, and who are my brothers?” 49 And stretching out his hand toward his disciples, he said, “Here are my mother and my brothers! 50 For whoever does the will of my Father in heaven is my brother and sister and mother.”

Let us take care of each other in the church as if we are family. Even though Mary and John were not related by physical blood, they were united by a deeper bond, the blood of Jesus Christ!

JOHN 19:28 After this, Jesus, knowing that all was now finished, said (to fulfill the Scripture), “I thirst.” 29 A jar full of sour wine stood there, so they put a sponge full of the sour wine on a hyssop branch and held it to his mouth.

All of the revelation of Scripture points to this.

As it says in verse 28, Jesus crying out in thirst fulfills Psalm 69.

How marvelously complete the prophetic testimony of the Messiah!

No essential moment is missing from it.

Even minor details of this great tragedy were prophesied centuries beforehand.

Psalm 109 prophesied the mockery of the blood-thirsty mob.

Psalm 31 prophesied Jesus’ being forsaken by his disciples and the yielding of His spirit to God.

Psalm 34 prophesied none of Jesus’ bones would be broken.

Isaiah 53 prophesied Jesus’ silence before his accusers and yet also being proved guiltless.

Isaiah 53 prophesied Jesus would be condemned with sinners yet he would also intercede for sinners.

Isaiah 53 prophesied God would place our sin on Jesus and by His stripes we are healed,

Isaiah 53 prophesied Jesus would be buried in a rich man’s tomb and yet God would prolong his days and He would see his children again.

All of this, centuries and centuries before the first Good Friday.

Now we behold the one who brings forth Living Waters is thirsty!

Now we behold the one who turned the water into wine refusing to descend from the cross to quench his thirst.

Was it merely a lack of hydration that led Jesus to cry out, “I thirst” or was there something deeper happening here?

Imagine a place completely devoid of God’s love, God’s peace, God’s grace, God’s kindness, God’s light. Imagine how dark, how hot, how barren that place would be. That has become the place of the skull.

Jesus’ thirst was the effect of the agony of His soul in the fierce heat of God’s wrath.

Jesus was thirsty because he was drinking the Cup of God’s Wrath to the last drop.

JEREMIAH 2:13-14 Be appalled, O heavens, at this; be shocked, be utterly desolate, declares the Lord, for my people have committed two evils: they have forsaken me, the fountain of living waters, and hewed out cisterns for themselves, broken cisterns that can hold no water.

Jesus is taking our sin’s barren, dry, wastle land, so we would thirst for his life, for his grace, for his holiness.

As the old hymn goes,

I came to Jesus as I was,

Weary, and worn, and sad;

I found in Him a resting place,

And He has made me glad.

JOHN 19:30 When Jesus had received the sour wine, he said, “It is finished,” and he bowed his head and gave up his spirit.

The atoning work of Jesus on the cross.

There is no further need for atonement of sin.

There is no good deed that can add to the cross.

There is no purgatory needed to purify God’s people.

There is no penance to supplement the sacrifice of Christ.

ROMANS 3:23-25 All have sinned and fall short of the glory of God, and all are justified freely by his grace through the redemption that came by Christ Jesus. God presented Christ as a sacrifice of atonement, through the shedding of his blood—to be received by faith.

EPHESIANS 2:8-9 For by grace you have been saved through faith. And this is not your own doing; it is the gift of God, not a result of works, so that no one may boast.

HEBREWS 7:25 Consequently, he is able to save to the uttermost those who draw near to God through him, since he always lives to make intercession for them.

Jesus died now we must decide.

Do we choose death or life?

The world or God’s Word?

Let us repent of our sin and return back to Heavenly Father.

If we die in our sin, we are storing up God’s wrath and will be separated from God’s love in eternal torment.

If we continue to live in our sin, willfully and unrepentantly, we will experience the due penalty of our rebellion in this life as well.

Believe my friend. Believe that Jesus is everything he ever said he was: Friend, Savior, King and God.

Jesus is not only the Lamb of God which was slain on Good Friday, but he is the Lion of Judah which will roar again on Resurrection Sunday!

Jesus said IT WAS FINISHED – He did not say, He was finished!

Its Friday but Sunday is coming!