Perish or Paradise: “Today You Will Be With Me In Paradise” 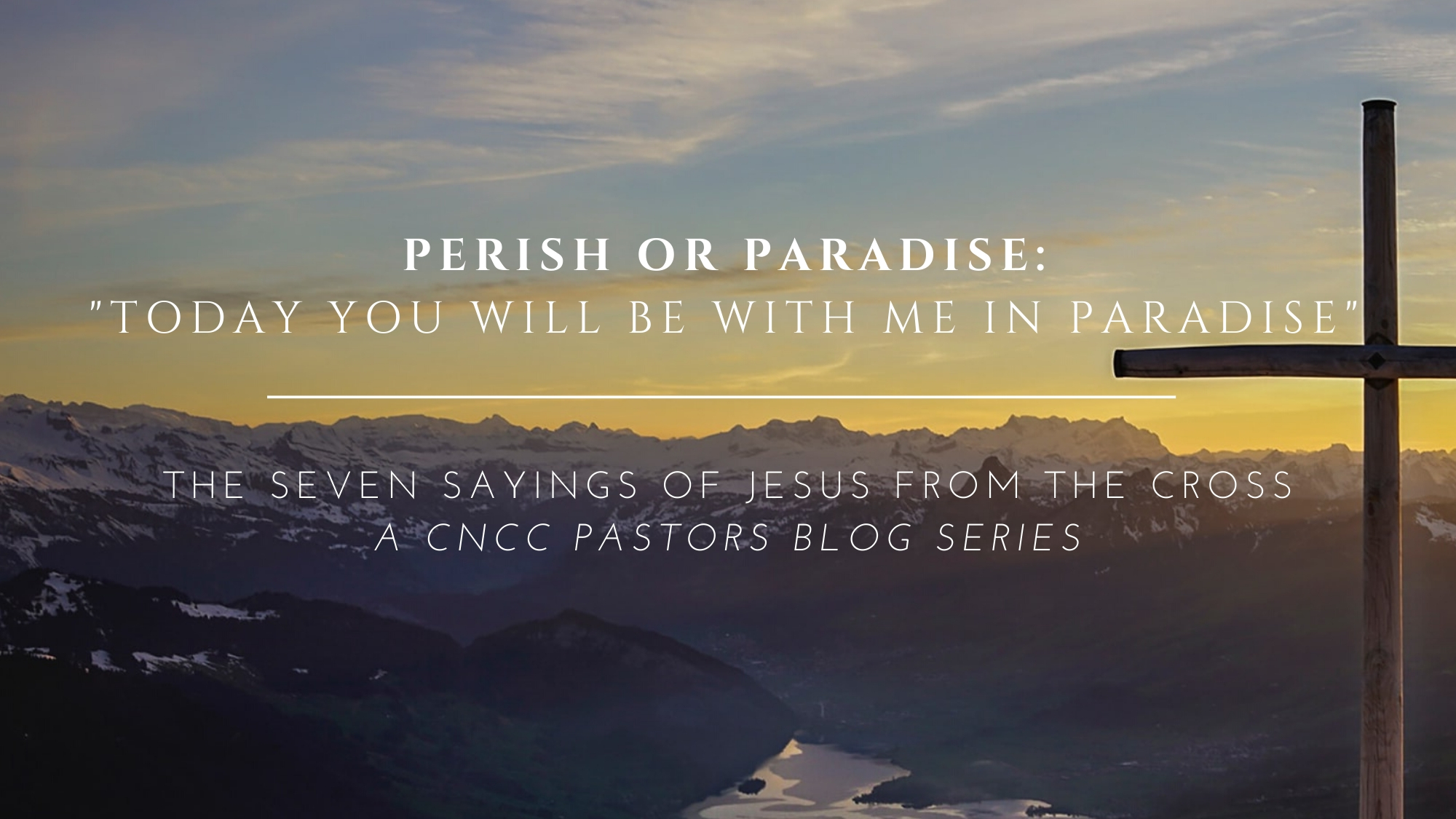 Today on our Pastors Blog, we begin an Easter series of five blogs on the seven sayings of Jesus from the cross.

One of the criminals who were hanged railed at him, saying, “Are you not the Christ? Save yourself and us!” But the other rebuked him, saying, “Do you not fear God, since you are under the same sentence of condemnation? And we indeed justly, for we are receiving the due reward of our deeds; but this man has done nothing wrong.” And he said, “Jesus, remember me when you come into your kingdom.” And he said to him, “Truly, I say to you, today you will be with me in paradise.” (Luke 23:39–43)

Our Lord’s words here tell a precious promise. A guilty, crucified criminal is heading to Paradise. The same day he’s punished for his crimes, he’s promised by his Creator to be in glory.

How did such a drastic change of destinations come about for this thief? Why did Jesus say what he did?

We see two responses to sin in the paragraph leading up to Jesus’s sweet words of paradisiacal assurance. While both criminals died a physical death that day, one ended up perishing, the other in Paradise. The difference was a matter of eternal life or death—and so it is for us.

The mocking criminal shows us the first way we may respond to our sin. Deflection. Anger. Blame. Non-repentance.

This criminal sees his guilt, but he does not fear God and turn from his ways. He rather gets angry, even blaming Christ.

It’s a nasty scene in our Bibles: “One of the criminal who were hanged railed at him, saying, ‘Are you not the Christ? Save yourself and us!’” (Luke 23:39). But this doesn’t only occur in this biblical narrative; it’s something that happens all the time. Sin is recognized in the human heart, but the human heart doesn’t melt. It hardens.

Luke records his words so carefully that we might say it is one of the best, succinct accounts of repentance found in our Bibles. Notice this criminal’s four-step response to his sin:

This criminal’s example is repentance. We fear God because we recognize we are sinners and justly deserve hell; but then we gaze upon Christ and trust him. We say along with the second criminal, “Jesus, remember me when you come into your kingdom.” Or in other words, “I know you are the innocent King, Jesus. But include me, a sinner, please…” And thus by grace Jesus takes our eternal punishment in our place.

And what’s the result? Now we arrive at Jesus’s beautiful words of promise; one of his seven last sayings from the cross. To this second criminal he promises, “Truly, I say to you, today you will be with me in Paradise” (Luke 23:43). That very day, that guilty man was to enter Paradise. Undeservedly, but with Jesus. And the same future holds true for us who have have repented and trusted in Christ.

Why Did Jesus Say “Paradise”?

But have you ever wondered why Jesus said “Paradise” and not “my kingdom”? It’s that word Paradise which makes this saying so unique. When reading the story, we’d expect Jesus to talk about his kingdom, because the criminal begs Jesus to “remember me when you come into your kingdom.” But Jesus switches the idea of kingdom to that of Paradise. Why is this?

It seems Jesus, even in his dying breaths, wanted to give yet another comfort to the criminal. This word Paradise is the same Greek word which is used for the Garden of Eden in the Greek translation of Genesis 2 which Jesus’s contemporaries used. That perfect Garden was the “Paradise” of God (see also Revelation 2:7). Jesus is adding this idea to the concept of his kingdom. What is his kingdom? It is Paradise, the New Eden, the fulfillment of how everything was always meant to be.

By using this word, then, Jesus shows the hope of all Christians, including our brother thief: Our future is like the state before the Fall, but better; it is the renewed Garden of Eden; it is Paradise.

Or think of it this way: Jesus essentially gives the entire storyline of the Bible by using this one word Paradise: God created a good world, a Paradise. But then there was a fall, and now (like the criminal) all are sinners. Yet for those who trust Christ, we and this entire universe will one day return back to who we were made to be, but even better.

The thief is in Paradise right now. He went there that day; that was the promise. And all who have died in Christ are also there right now (no wonder the apostle Paul said it is “far better” to die in Philippians 1:23). But this "intermediate state" is not the end goal of Paradise.

The final page of the story of history is when Paradise—and all who are there right now—comes to earth (Revelation 21:1-5). Finally everything will be made right again on earth. Forevermore we’ll be together with Christ here in Paradise.

So when Jesus says, “Today you will be with me in Paradise,” we see him display both stunning theology and a beautiful promise. But given the scene with the two criminals (and not just one), we also see our Lord give a sobering warning. Each of us in this paragraph is promised either perishing or Paradise. And there is no in between.

For us who are in Christ—who by grace have repented like the second criminal—we have no more condemnation (Romans 8:1). Our hope is sure, forever. We’re going to Paradise the day we die. We have "an inheritance that is imperishable, undefiled, and unfading” (1 Peter 1:3-4). We’re going there not because of us—we're the criminals—but because we’re found in Christ. “You will be with me in Paradise.” Then one day, we in Paradise will return back here to earth with Christ. Then, all will be Paradise once more.

But let us not forget the other option of perishing, exhibited in the first criminal. We harm the world if we announce to the world Jesus’s saying here as if it is his promise to those living for the world. We may be tempted to do this because it sounds encouraging, or perhaps because it’s something we wish were true. But it isn’t. The first criminal isn’t saved. He dies with his sin, in his sin, and justly is still bearing the punishment for his sin. Or to put it solemnly: while the second criminal now is in Christ forevermore, the first is still a criminal forevermore. We have no reason to believe Jesus took the first criminal’s sins, for he died in them. Only the second criminal is forgiven forever.

Although admittedly hard to swallow, this is gospel-truth. And it’s even found in Jesus’s comforting words to the second criminal. For when Jesus says, “Today you will be with me in Paradise,” he uses the singular “you”; the “you” is only directed to one person, not two. If the plural form of the Greek word “you” was used (implying “you both” or “you all”), then our theology would be drastically different—we’d say that Jesus was promising both criminals Paradise. But our Lord didn’t do that. He spoke Paradise to one repentant criminal, and not to the other. One is in Paradise—right now—the other is not.

Yet before we lose hope, let us remember: repentant criminals (like us) were at one point non-repentant. Recognizing that this took place around noon (Luke 23:44), we can imagine the second criminal probably was as non-repentant as the first at around 11 a.m. He too had a hard heart before his change, just as we all did prior to our conversion. May we, then, not lose hope for those we love who right now are like the first criminal. They may yet come to repentance. “God may grant them repentance” (2 Timothy 2:25). They may yet one day enter Paradise.

But for those of us who have trusted in Christ, may you hear his promising words of Paradise as your future. You may not die today, but the day you do his words will be as true and hope-giving as they were for our brother thief back then. “Truly, I say to you, today you will be with me in Paradise.”