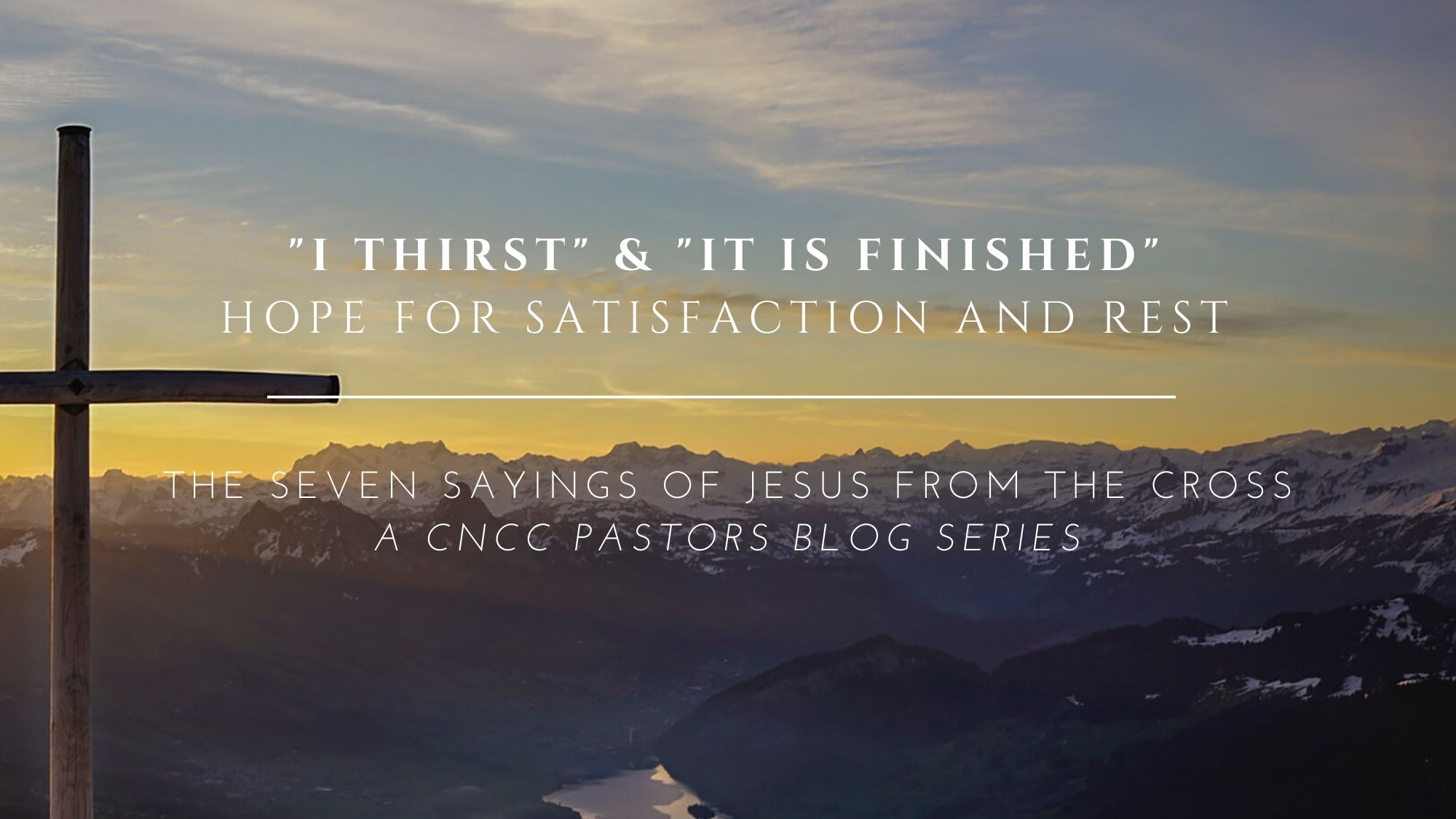 After this, Jesus, knowing that all was now finished, said (to fulfill the Scripture), “I thirst.” A jar full of sour wine stood there, so they put a sponge full of the sour wine on a hyssop branch and held it to his mouth. When Jesus had received the sour wine, he said, “It is finished,” and he bowed his head and gave up his spirit. (John 19:28-30)

These verses contain two of Jesus’s last seven sayings as He hung on the cross. They are the shortest of the sayings, consisting of only five words combined (and only two words total in the original Greek). But do not mistake the brevity of these sayings with having a shallow meaning. Rather these two words from Christ have profound meaning and implications.

What does Jesus mean when He says, “I thirst” and “It is finished”? For each saying we can see both a surface-level, physical meaning as well as a deeper, spiritual sense.

When Jesus says, “I thirst” (John 19:28), there is no doubt that He is utterly parched from the events that transpired against Him. He has been beaten and flogged. A crown of thorns was pressed into His head. He was forced to carry His cross on His flayed, exposed back. And then nails where driven through His hands and feet. Jesus then hung there on the cross for six hours (Mark 15:25, 33), experiencing loss of blood, severe exhaustion, and excruciating pain. In the midst of the torture, Jesus was desperately thirsty. Jesus’s cry for a drink was not calm and composed, but a cry of agony. His physical thirst was indicative of the physical torment that He was experiencing.

But it was also a fulfilment of prophecy. Though the particular text Jesus was referring to is not mentioned, it is likely either Psalm 62:21 or Psalm 22:15. In either case, what is clear is Jesus’s unwavering commitment to order His life around the Scriptures, even in the midst of suffering. In His final moments of agony on the cross, Jesus was still faithful to fulfilling the Scriptures. May that be said of us as well in times of suffering and crisis.

Yet there is something deeper and more profound than physical thirst in this cry from Jesus. Jesus was also crying out about His spiritual thirst as He hung on the cross.

The five other instances in which the word “thirst” is used the Gospel of John all refer to spiritual thirst (John 4:13,14,15; 6:35; 7:37). In the first three instances, Jesus tells the Samaritan woman at the well that He can offer her living water (John 4:7-15). If she were to drink of this water, she would “never be thirsty again,” and the living water will become a “spring of water welling up to eternal life” (John 4:14). Later, after the feeding of the five thousand, Jesus declares, “I am the bread of life; whoever comes to me shall not hunger, and whoever believes in me shall never thirst” (John 6:35). And finally, on the last day of the Feast of Booths, Jesus cries out, “If anyone thirsts, let him come to me and drink. Whoever believes in me, as the Scripture has said, ‘Out of his heart will flow rivers of living water’” (John 7:37-38). All usages of the word “thirst” in the Gospel of John point to a spiritual thirst, not merely a physical thirst.

Jesus, who from eternity past enjoyed perfect intimacy with the Father, was for the first time ever experiencing the painful absence of the Father’s presence. This is why He cries out, “My God, my God, why have you forsaken me?” (Matthew 27:46). Jesus’s soul is in agony. His soul is parched.

Jesus experienced physical thirst. Yet His thirst was more profound than just that. He experienced a deep spiritual thirst for God who had separated Himself from Christ as He bore our sins.

After receiving the sour wine, Jesus cried out, “It is finished” (John 19:30). This could be understood as merely the pronouncement of the end of His life. He was dying. But we would be remiss to think that this is all that is communicated. Just as with His statement about being thirsty, this last saying of Christ also has a profound spiritual component.

Jesus’s prayer the night before His crucifixion gives us some insight into what’s really going on when he says, “It is finished.” In His prayer to the Father, Jesus had said, “I glorified you on earth, having accomplished the work that you gave me to do” (John 17:4). The Greek verb translated here as “accomplished” is the same verb used by Jesus when He said, “It is finished.” On the cross, then, Jesus is declaring that the work that His Father gave Him to do is now finished.

The Father’s work for the Son was to be the sacrificial Lamb of God. The Lamb that would be slain so that believers would be safe from the wrath of God at the final judgment (John 1:29; 3:36). Jesus was sent to pay for the sins of others. One sin against an infinite holy God yields a debt of infinite proportion. It is utterly futile to think that we can somehow pay down this debt with good works (Ephesians 2:8-9; Romans 4:1-8). We can’t. And because God is a just God, He could not just sweep this debt under the cosmic rug. The debt had to be paid for.

This is why we need Jesus, the God-Man. The only one who is truly God and truly human. The only one who could bear the wrath of God towards sin and thus effectively pay off the debt that we owed. Jesus’s job was to seek and save the lost (Luke 19:10) by putting their sins upon His shoulders and dying in their place.

This act of propitiation—that is, appeasing and satisfying God’s wrath towards sin—is the work that Jesus came to do (Romans 3:21-26; Hebrews 2:17; 1 John 4:10). He came to purchase our salvation with His blood. He came to save us from the terrifying storm of God’s final judgment by being crushed by God’s wrath for our iniquities (Isaiah 53:4-6). This work he declared “It is finished.”

How do we live in light of the reality of these sayings from Christ? Though many applications can be made from these two words, I will briefly mention two.

Second, Jesus finished the work on the cross so that we can find our rest in Him. We trust not in our work, but in Christ’s work. We do not need to work in order to curry God’s favor or pay back our debt. Instead, we trust in Christ alone and the work that He did on the cross to secure our salvation. We believe “It is finished.”

May we each rejoice in the salvation and soul-satisfaction that was purchased with the precious blood of Jesus.

The Law of Love Part II: Showing Love in a Secular Society

The Law of Love Part I: Unity in Diversity in the Church

The Weight of Glory

Comfort in the Coronavirus Crisis - Part II: The Sovereign God Who is Here

Comfort in the Coronavirus Crisis - Part I: The Sovereign God Who is in Control

Godliness with Contentment is Great Gain

Joy in Calamity: Why the Coronavirus Can’t Kill Our Joy

Practicing Prayer During the Coronavirus Crisis